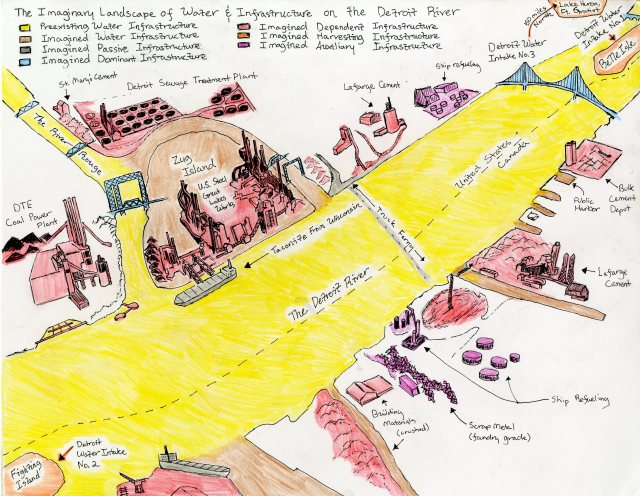 Recentering Detroit is a multipart examination of culture of development in the current city, the ongoing crises and the efforts by residents to define their city, not as a relic of the past to be resurrected or “revitalized,” but a place where people live their lives. This examination will be made within multiple contexts, including race, racism, the complex histories of Detroit, infrastructure and economics. Click to read: Part 1: Against Revitalization.

Matthew Gandy writes that “water lies at the intersection of landscape and infrastructure, crossing between visible and invisible domains of urban space” (1). He continues: “water forms part of the material culture of modernity, ranging from the private spaces of the home to vast technological networks that have enabled the growth of cities…” (2). Places of intersection between the visible and invisible, and the point of entry into the material culture of modernity: these are the spaces where human societies make sense of their world and imagine new worlds.

Gandy writes of the origins of the concept of Landscape, which stems from the Dutch word Landschap, meaning “a unit of human occupation intimately tied to the drainage and regularization of land” (3). The things here are “drainage” and “regularization.” These are tied to imagination and water, forming a series of interactions.

Regularization of land is the result of cultural imagination. The current concept of imagination comes from the Old French term imaginer: to sculpt, carve, paint, decorate, embellish. This in turn derives from the Latin imaginari: to form a mental picture of oneself. Traveling back in etymological time, these concepts describe what humans have done to the land and water: forming a mental picture of themselves, their societies, and sculpting the world.

The river bottom is invisible. So are the sewage pipes and water intakes, the rail and automobile tunnels, the oil and gas pipelines and the communications cables. The regularization of the river through imagining and sculpting has its visible counterpart on land. 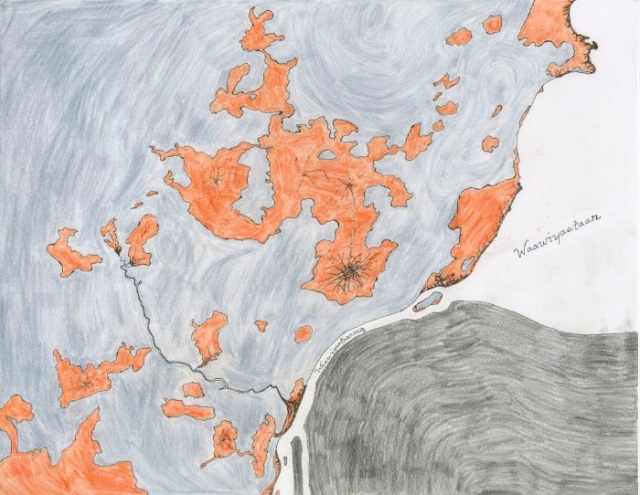 Pre-European Detroit: its Water as its Road

At the beginning of the 17th century, the Detroit River had more tributaries than it does today.1 Many were filled in, and one, Connor Creek, still flows under a vast industrial complex on the Eastside.

These waters have other names. The Wea called Lake St. Clair waayaahtanonki: or The Whirlpool (McCafferty). To the Ojibwe, the Detroit River is Waawiyaataanong: At the Curved Shores, or the Crooked Way. Lake Erie is Waabishkigoo-gichigama, the Neutrals Sea, after an Indian confederacy whose true name has been forgotten (Lippert). The water empties from the whirlpool, flows through the crooked way on the curved shores, and passes into the sea of a forgotten nation. There is poetry and metaphor here, but it is arbitrary. The Anishinaabe could have named them anything. The point is to focus on the water, and what people and cultures have imagined for water, because of the water.

Paul Edwards writes that “infrastructures simultaneously shape and are shaped by – in other words, co-construct – the condition of modernity” (2). Preexisting conditions inform technology and the regularization of land. There is a bay, a river, a plain, a field and a mountain. These become harbor, shipping lanes, a street grid, a farm and a tunnel. Once realized, these are the new preexisting conditions.

Modernity begins in the imagination. Edwards writes: “to be modern is to live within and by means of infrastructures,” saying that “infrastructures are like laws. They create both opportunities and limits, they promote some interests at the expense of others. To live within multiple, interlocking infrastructures of modern societies is to know one’s place in gigantic systems that both enable and constrain us” (2, 6).

Modernity, living within and by means of multiple, interlocking infrastructures, gigantic systems enabling and constraining: this is our urban ecology. Edwards says that “mature technological systems – cars, roads, municipal water supplies, sewers, telephones, railroads, weather forecasting, buildings, even computers in the majority of their uses – reside in a naturalized background” (1). Newness is technology. Old technology becomes something in the background, an infrastructure: out of sight, out of mind.

The working waterfront of the Detroit River must first be imagined as it was three centuries ago.2 The river is the infrastructure. There is heavy canoe traffic, as this is a busy crossroads for the Wyandot, Kickapoo, Thakiwiki, Meskwaki, and other Ojibwe and independent tribes (Farmer 322). The occasional Frenchmen pass by, also mostly in canoes, but occasionally in tall ships. The river is not out of sight, nor out of mind.

Over the centuries, the Detroit River became a busy highway, host to immense industrial infrastructure that depends on, uses floats on, and channels the water, as well as many auxiliary infrastructures that support those infrastructures. 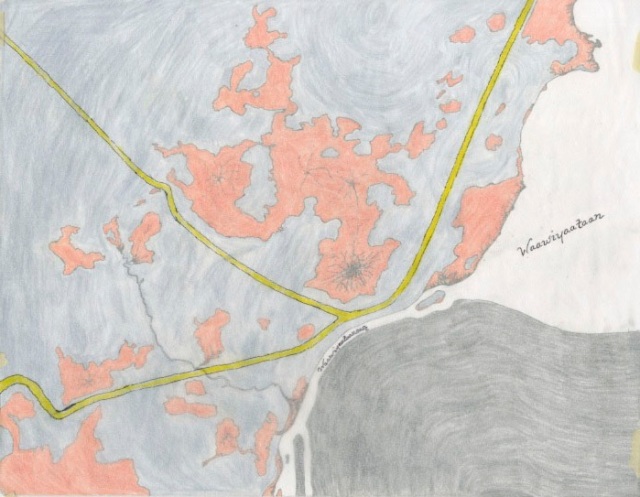 Water was the original Detroit highway, and it determined its urban bones. Augustus Woodward’s plan for the city may have riffed off L’Enfant, but it was situated by the trading routes of Indians. The Anishinaabe and others who lived and traveled through the region did not drain the land, and so the physical features of Michigan were non-negotiable. As such, the Indians followed the high ground (figs. 1 & 2). Detroit was the center of a vast trade network that stretched between present day Port Huron and Lansing, Michigan, Toledo, Ohio, and Chicago, Illinois. When Woodward planned after the city burned, he based it off the half-wagon wheel spokes of what are now Gratiot Avenue, Grand River Road and Michigan Avenue, the latter of which was the Great Sauk Trail that connected Detroit and Chicago (Mason 18).

If one wanted to travel in pre-French Detroit, there were two choices: on the water or around it. In places where it was practical, the river as a highway worked. In others, trails had to circumnavigate the wetlands. Infrastructure connects, but it does not connect everything. Steve Graham writes that infrastructures “unevenly bind spaces together… they dramatically, but highly unevenly ‘warp’ and refashion the spaces and times of all aspects of interaction – social, economic, cultural, physical, ecological” (11).

1. Some have actually been added as well: channels, canals and other modifications to the water have been constructed.

2. It must also be considered as a sort of watery 8 Mile: a compressed environmental justice community, divided by industrial and transit infrastructure, and by municipal borders.

Edwards, Paul N. “Infrastructure and modernity: Force, time, and social organization in the history of sociotechnical systems.” Modernity and Technology (2003): 185-225.

Farmer, Silas. The history of Detroit and Michigan or the metropolis illustrated. 1889.

All maps, sketches and images are the work of this author.